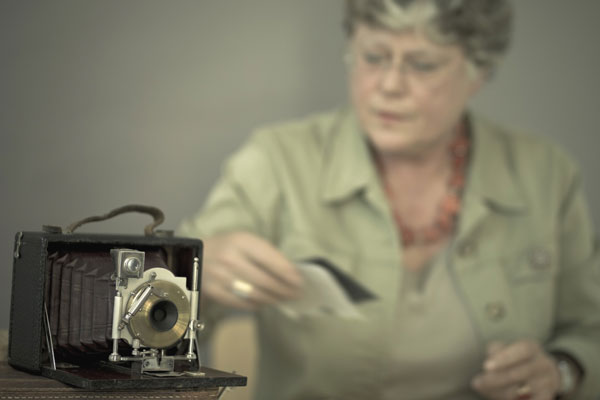 The exhibition SYMPTOMS OF THE FUTURE: IMAGE — CAMERA — IMAGE presents works by Esther Shalev-Gerz and Jasper Rigole. It looks into the production of images, exploring how we relate to, read and consume images once the technology of their making and distribution changes.

THE LAST CLICK by Esther Shalev-Gerz was commissioned in 2010 by the Museum for Photography of Brunswick, Germany. The scope of the work is twofold. First the artist visited the Rollei factories which are being drained of human and mechanical presence, staging an old Rolleiflex camera as a character. In her images the Rollei teeters on the long legs of its tripod through the workshops and acknowledges the emptiness it comes across. Secondly Shalev-Gerz invited people who wanted to dispose of their analogue camera, to share the stories about the object. Twenty-five persons accepted to participate in the project. The video creates a collective phenomenon out of individual stories, capturing small poetic gestures: the way these cameras are picked up, opened, closed and operated.

ELECTIVE AFFINITIES is a project started in 2012 by Jasper Rigole, in collaboration with Egon Van Herreweghe. In each “edition” of this project, two artists use a photocopier to create various visual ensembles based on a supply of found imagery. In the process, a visual dialogue develops in which the artists react to each others proposals by adding images and revising existing ensembles, or by following lines that emerge in the course of the process. Since the interpretation of these actions does not turn into a verbal discourse, it creates room for an intuitive process that facilitates rapid, direct interaction. At the end of the project, the image ensembles are reproduced as a magazine. Out of Sight becomes a temporary studio of the sixth edition, where the images can be collected, combined and finally reproduced. It is realized in collaboration with Dušica Dražić, curator of the exhibition.