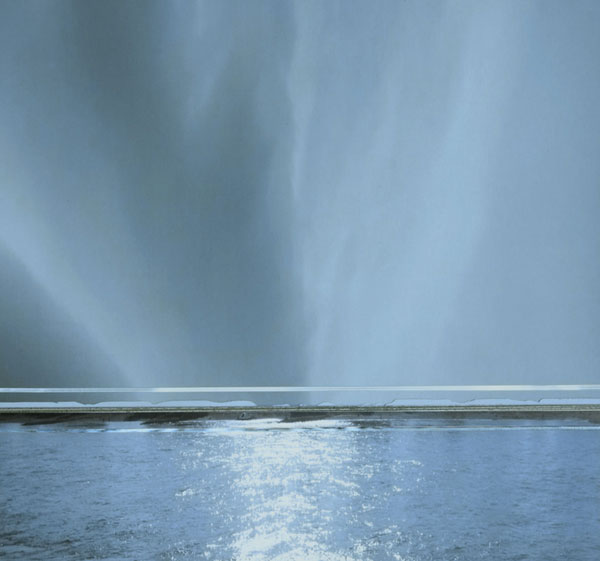 KETELEER GALLERY is very pleased to introduce Continents and Stories, the first solo exhibition by Anna Vogel (°1981. Herdecke, Germany) with the gallery. The exhibition consists of an entirely new series of photographic works. Vogel studied at the Kunstakademie Düsseldorf in Germany where she was taught by famous photographers Thomas Ruff, Andreas Gursky and Christopher Williams. She subsequently succeeded in developing her own, minimalist style in which she manipulates photographs she made or found through a combination of digital and manual interventions. Vogel always completely appropriates the image, be it by very minimal interventions like a few scratches on the surfaces or by making a complex collage in which she joins meticulously selected and altered images in a new poetic, even somewhat musical, composition.

A recurring element in Vogel’s oeuvre are her hand-drawn ‘vibrating’ ink lines which she repeats over and over with the help of special rulers until a pattern is formed reminiscent of the waves of stone layers in ancient rocks or the registrations on a heart monitor and which create a layer of noise which purposely blurs the image underneath. After all, interpreting something is never neutral and Vogel’s work is an overt confession of this. A few aberrations here and there reveal the human labour behind what appears to be a computer-generated monotonous pattern: a time-consuming process based on patience, dedication but also modesty…Vogel never leaves an overtly expressive touch, her works seem to be more about human subjectivity in general than about herself, a refreshing attitude in today’s identity-obsessed society.

Whenever we are faced with a vast landscape such as the ones in Vogel’s works, we always experience an intense awareness of our “self”: our internal interaction with the outside world that is, a dialogue equally intimate as self-transcending which automatically generates a multitude of stories in our minds. With the power of our imagination we move effortlessly to that distant mountain in the distance and we can almost smell and feel the air there. But when we take a picture of such a landscape, to preserve it ‘as it was’, we inevitable select only part of reality, a selection thoroughly coloured by our thoughts, feelings, projections and expectations. The traces which Vogel leaves on the images – the scratches, ink lines, cut-outs and varnish splatters – which complement and distort the image, are a wonderful representation of those countless subjective distortions that we impose on the world through our perception process. That which we try to grasp, the thing itself, therefore remains forever out of reach.

Throughout history, the horizon has always been an evocative symbolic boundary between the solid and the ephemeral – the world of matter and that of the spirit. Vogel uses this boundary as a new pivot point to activate the wafer-thin line between reality and imagination, the point where human creativity manifests itself. In The Water in You (2020), for example, the sun was replaced by a rain shower and in other works the starry sky has become an illegible digital abstraction.

With her digital and manual transformations, Vogel plays an illusory game in which the distinction between the two is sometimes barely distinguishable, a reflection of how digitization is quietly infiltrating our entire reality. But the boundary between recognisability and abstraction is also one that she likes to explore. In Soul Account (2020) abstraction has completely taken over the landscape and in other works some parts seem to have been taken over by a digital ‘something’ or look like they were not completely translated due to a computer malfunction. In System Records (2020) and Formal Records (2020), islands were replaced by and abstract flat form, reducing them to memes of the idyllic ocean image, a symptom of our modern visual culture in which we’re increasingly treating things more and more superficially.

In a world saturated with images to the point of utter interchangeability, slowing down is sometimes the only cure against indifference and Vogel’s interferences as well as the time and care it took her to create them – and the time and attention it takes us to read them – allow for a renewed sense of wonder.