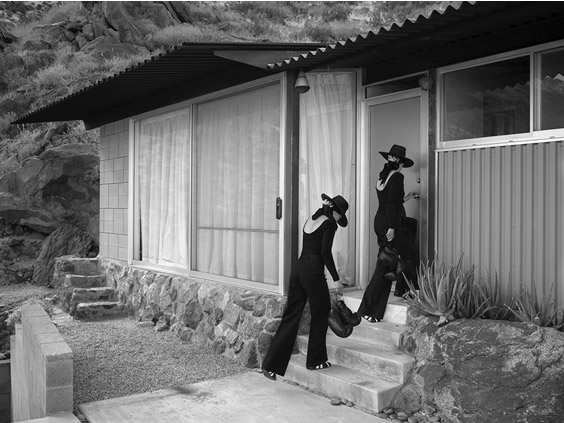 The Ravestijn Gallery is happy to announce the world première of Anja Niemi’s all new series The Blow.

At first glance, Anja Niemi’s new work shows an unaccompanied woman, dressed in black and with a face that is always turned, driving to a solitary house in the desert. Here she trades her clothes for that of a boxer. The boxing paraphernalia builds upon the idea that each photograph and setting is a site of mental training and introspective battle. As with all of Niemi’s work, the narratives she constructs and then performs in as both author and character simultaneously, act as allegorical amplifiers to the conversations that lie beneath.

Anja Niemi (b. 1976, Norway) always works alone; placing herself within her own meticulous tableaux, she constructs fictional stories where she is both the author and the character. In Darlene & Me (2014), Niemi plays the parts of two identical women living against the backdrop of a sparse, bleached house in the desert. The dualism in each performative photograph speaks clearly of the internal, and often opposing, voices we are all so attune with. In this way, as with all of her work, Niemi appeals to ideas that are innate to the human condition, rather than being confined to a personal mediation. And whilst her poetic narratives are wholly imagined (although frequently inspired by film and literature), they act as an intimate space to catalyse real conversations about identity, conformity and the relationship we have with ourselves.

Anja Niemi studied at the London College of Printing and Parsons School of Design in Paris and New York and has exhibited in galleries worldwide. Four monographs of her work have been published, Photographing in Costume (Little Black Gallery, 2015), Short Stories (Jane & Jeremy, 2016), The Woman Who Never Existed (Jane & Jeremy, 2017) and She Could Have Been A Cowboy (Jane & Jeremy, 2018). Her work has been published in Firecrackers: Female Photographers Now (Thames & Hudson, 2017), and her image The Garden Hose was selected for the volume 1001 Photographs You Must See Before You Die (Cassell, 2017). Her latest monograph In Character was published this year by Thames & Hudson.