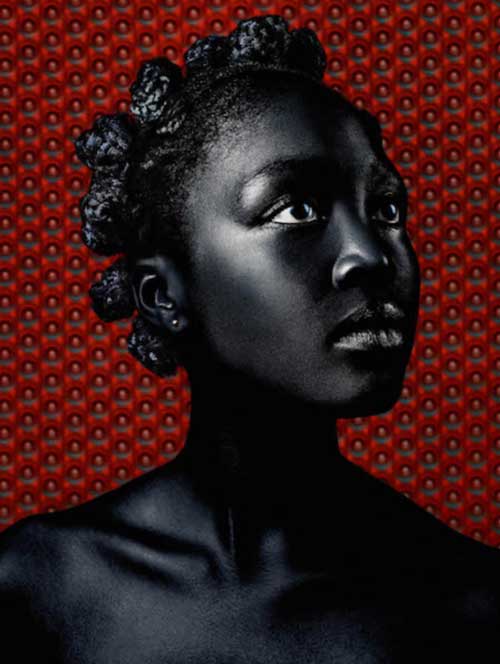 Gallery FIFTY ONE proudly presents ‘My Hair, My Soul, My Freedom’; an exhibition celebrating the diversity, artistry and beauty of black women’s hair through the work of two very different artists. From cornrows, to braids, locks, weaves, natural or straightened hair; the diverse array of black hairstyles (or ‘crowns’, as they are called in Afro-American slang) has an historic, social and spiritual meaning, and plays an important role for the identity of black women in today’s society.

Sandro Miller (US, 1958) is one of the world’s most celebrated advertisement photographers. For his personal projects he focuses mainly on portraiture with a humanistic approach, addressing social issues across the globe. Inspired by the experiences of his wife Claude-Aline Nazaire – who has ancestral roots in Haïti, the Dominican Republic and America – Miller explored the way in which black women express their personality, pride and heritage through their hairdos. For the resulting series ‘CROWNS: My Hair, My Soul, My Freedom’ (2016-2019), the artist asked each participating women – first in Chicago, and starting from 2019 also in Johannesburg and Dakar – to share her personal ‘hair story’ with him. Working with a hair stylist and makeup artist, a style of hair was then achieved that the sitter has worn, or would be willing to wear out into the world today. Each woman’s skin was depicted with the same black tone, that serves as an equalizer that turned the sculptural hairdos into the focal point. The women were positioned in front of a deep black or brightly patterned fabric, the latter inspired by and including several African prints. The backgrounds were selected based on the individuality of the models and the shapes and colours in their hair. The contrast between the deep skin tone and the vibrant colours at the back, lends the images great vibrancy and dimensionality.

Next to honoring black hair, beauty and pride, this series urges the viewer to reflect on the fact that black women in the US haven’t always had the freedom to wear their hair the way they wanted. There was the dehumanizing practice of shaving African women’s hair during slavery (thus erasing important signifiers of culture and identity) and a 1786 Louisiana law requiring black women to cover their hair in public. Following examples of black women whose hairstyles were considered ‘inappropriate’ or ‘unprofessional’ by their school or corporate environment, by passing the CROWN (Creating a Respectful and Open World for Natural Hair) Act, California recently became the first American state to ban discrimination based on race-based hairstyles. The personal and political importance of black hair is also featured in popular culture. From the song ‘Don’t Touch My Hair’ of American singer Solange Knowles to the bestseller ‘Americanah’ from the Nigerian writer Chimamanda Ngozi Adichie (about a Nigerian female immigrant in the US, in which the practice of styling or relaxing hair to conform to European beauty standards, is extensively discussed): they all testify to the complex bond a black woman has with her hair and how she can use it to reclaim power over her own body.

The cultural and emancipatory value of black hairdos is also reflected in the work of Nigerian photographer J.D. Okhai Ojeikere (1930-2014). During his career as a photographer, Ojeikere spent a long time working for the government. It was in his capacity as a member of the national Arts Council that he began to focus on documenting Nigerian culture. In 1968 he started his largest and most famous project that spanned more than 40 years; the documentation of Nigerian hairstyles and head wraps. His collection of over a thousand black and white negatives shows the enormous diversity and complexity of Nigerian hair culture, which was formed by historical, cultural and social influences and ranging from purely decorative to messengers of symbolic meanings, revealing social status, age, tribal and family traditions. Through his photographs, Ojeikere preserved these ‘sculptures for a day’ for generations to come, meticulously inventorying their name and meaning. Next to its anthropological, ethnographic and documentary quality, this body of work also possesses a highly aesthetic value. The sober style in which he photographed his models – recording them systematically from the rear, sometimes in profile and with a simple or missing background – focuses all attention to the sculptural quality of the headdresses and hairdos.

Today, Ojeikere is considered as one of the most important African photographers of the 20th century, with exhibitions at among others the Venice Biennale of 2013, Documenta (2017) and the Foundation Cartier pour l’art contemporain (2000), and the inclusion of his work in prominent collections such as The Metropolitan Museum of Art, the MoMA, The Victoria and Albert Museum and the Tate Modern.
The publication ’CROWNS: My Hair, My Soul, My Freedom’ by Sandro Miller, was recently released by Skira, with an introduction by American actress Angelas Bassett and a poem by Patricia Smith. The book received raving reviews in Musee Magazine and Oprah Magazine, among others.