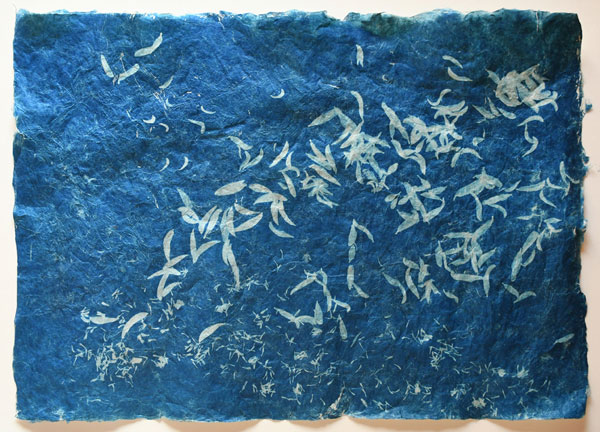 This show is postponed due to Corona restriction until …..2022. Stay tuned.

Bildhalle Amsterdam has the pleasure of presenting the first Dutch solo exhibition of Mika Horie (*1984), “Kiku”. The Japanese term “Kiku” means to hear or to listen. By listening to her natural surroundings, Horie says she’s better able to focus on the processes of her labor-intensive photography.

The photographic work of artist and artisan Mika Horie taps into sources of alternative printing techniques going back to the earliest days of photography. She focuses on paper making and cyanotype printing, which was developed in 1842 and became popular as a low-cost reproduction technique for drawings, also known as blueprinting. Soon after it was invented the English botanist and photobook pioneer Anna Atkins (1799-1871) used the process to make contact prints of British algae.

Horie’s way of printmaking is sustainable, from the laborious custom paper production to the imprint of images. Whenever she disapproves of a photograph she can return it to the natural surroundings from where its material components originate.

In 2013 Horie moved into a mountain house in Ishikawa Prefecture, where she finds her stu- dio surrounded by forests and fresh water springs. From the bark of the gampi trees surrounding her home, Horie harvests the fibers which she then turns into pulp and paper. She takes the water needed for paper production from a nearby river stream. Gampi bark yields strong crisp sheets that are translucent. The thinner the paper sheets, the more satin-like its texture becomes.

Texture is key for Japanese artisanal papers and Horie excels in letting texture and structure determine the image to a large extent. After the paper is ready Horie prepares it with a salt solution and mounts photographic negatives on top or, for example, arranges tea leaves on the paper sheet. She then uses sunlight to change the chemical structure of the emulsion through which the image appears in deep shades of cyan blue.

Until two years ago, Horie hauled a vintage 8 by 10 inch camera into the same hills where she harvests the gampi. She now uses a single lens digital camera, to accommodate a wider variety of image sizes, with which she photo- graphs for example mountainscapes and foliage, as well as nearly-forgotten village.