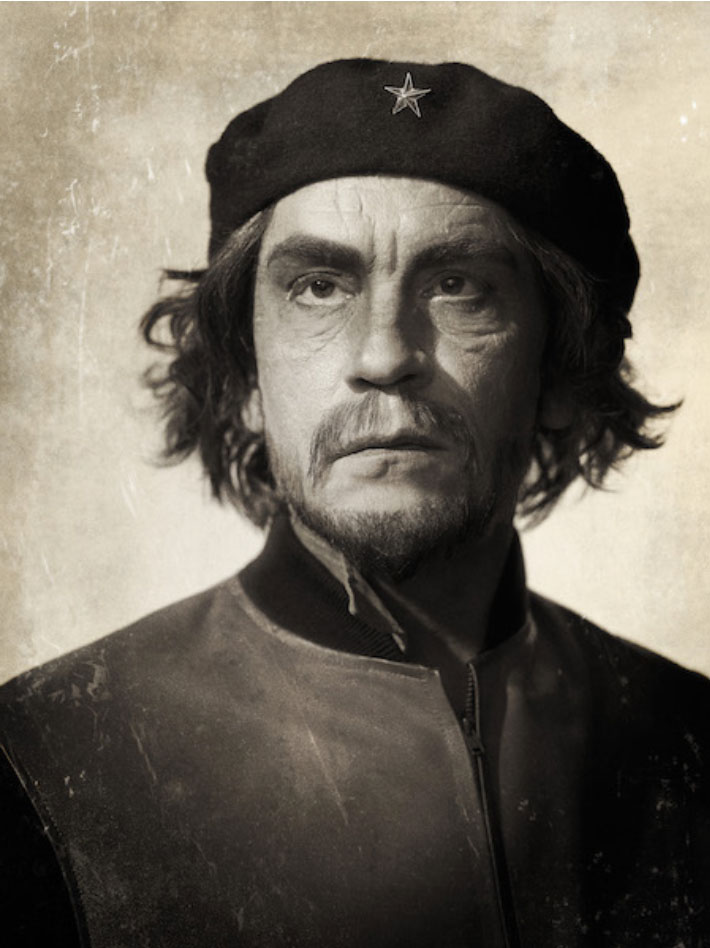 For this project, Miller went back to the iconic images that have always inspired and moved him in his career as a photographer and recreated these memorable classics with his close friend and muse John Malkovich as his model. By getting into the skin of the master photographers who created these images, Miller tried to understand what makes these shots so captivating and how they changed the art of portraiture in photography.

Under Miller’s close direction, Malkovich masterly transformed himself into a diverse set of characters, ranging from John Lennon to Marilyn Monroe and Picasso to Dorothea Lange’s iconic ‘Migrant Mother’. Regardless the age or gender of the original model, Malkovich was able to mentally go to that specific time and place and convincingly become that person.

Next to Malkovich’s brilliant chameleon-like performance, the strength of this series lies in the amount of effort that Miller put into fully understanding the image he wanted to recreate both on a technical and emotional level. The actual shootings in 2014 and 2017 were preceded by 2 years of research in close collaboration with a team of set-builders, (hair)stylists and make- up artists to ensure that every detail was correct. Miller dissected every photograph to track down valuable knowledge of the original location, the used lighting and cameras. On set, he also tried to immerse himself in the atmosphere and dynamic that were present when these images were shot. Even the sizes of the prints and the way they are framed approaches the original as closely as possible, adding to the experience of viewing this series in real life. The result is not a gimmick nor a parody, but a successful homage to the masters of photography and a report of a moving collaboration between two contemporary artist that deserves its own spot in photography history.

As an autodidact, Miller received his education primarily by studying books of master photographers, most importantly Irving Penn. He started out his career as a commercial photographer and became one of the top advertising photographers worldwide, with clients including American Express, Coca-Cola, Adidas, Nikon and BMW. His editorial work has been featured in acclaimed magazines as GQ, Esquire, Forbes, The New Yorker and Stern. In his personal projects, Miller focuses mainly on portraiture, with special attention to technical perfection, expression and human connection. His series often address social issues, such as his recent portraits of dying cultures in Papua New Guinea (2019), or his project about black hair styles, entitled ‘My Hair, My Soul, My Freedom’ (2016-17).

Throughout his career, Miller closely worked with his longtime friend John Malkovich, with whom he created among others the film ‘Butterflies’ (2011) and the series ‘the Malkovich Sessions’ (2016). ’Malkovich Malkovich Malkovich! Homage to Photographic Masters’, was previously on view on several locations in Europe, Brazil, Russia, the United States and Australia. In 2015, the series was shown at Les Rencontres d’Arles to great acclaim. Recently a show was opened at the Magazzino delle idee in Trieste (Italy) which runs until 31/01/2021.

Dates to be (re)confirmed due to temporal COVID-19 closing