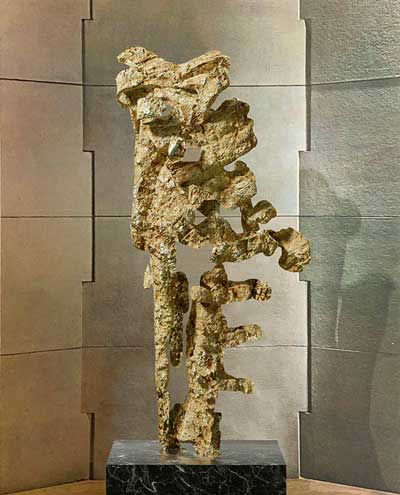 In his new exhibition at The Ravestijn Gallery, Koen Hauser (1972) presents a mysterious collection of photographs of objects and sculptures; many of these only exist in his imagination until he visualises them through an array of digital and manual means.

As author Merel Bem wrote; ‘As a photographer with a deeply rooted sense of creative urge, Koen Hauser still never departs from the idea that a photograph should reflect reality. But why not construct a reality following his own rules? In his hands, photographic material is as malleable as wax, to be molded into every conceivable form.’

Hauser’s work nearly always originates in historical books; from the colors that pervade through bygone publications to the expressive design language and the materiality of photographic reproductions found within. In Skulptura, he introduces sculptural artifacts of disparate origin, processing them with a diverse assortment of approaches and working methods. Importantly, Hauser does not rely on digital rendering alone to conjure up these motifs but also, at times, involves himself in the physical craft of making such pieces with clay. Other photographs derive from the photographs of objects from art history – with their museum like backdrops and in their original reproduction quality – he transforms them into newly envisioned images with the aid of photoshop.

One particular photograph from Skulptura represents a miraculous metamorphosis of the ‘Rasa’ ensemble from the Flowerbomb collection of Viktor & Rolf, originally found in the collection of the Centraal Museum of Utrecht. Using images of the ensemble for reference, combined with software processing, Hauser attempted to make a 3D model of the couture piece. The experiment ended in apparent failure, yet the result, which only remotely resembled the shape of the original, was then covered in the textures of old stone, creating an image that is reminiscent of precious archaeological finds and modernist sculptures from the 1950s.

Indeed, within his own process, Hauser very much acts as a magician. Playing with new relationships, interactions and occurrences with varying style and form, he moves seamlessly through the world of sculpture, photography and fashion. And at the same time, he appeals to ideas from philosophy, mythology, animism, religion and spirituality. This nexus of divergent methods, references and hybrid structures are effortlessly intertwined, resulting in an anthology of Hauser’s world of wondrous shapes and forms. And in their enchanting seduction,the photographs of such material and physical objects evoke the desire for spatial experience, but it is the impossibility – inherent to the medium of photography – of such an action that gives the images their sometimes uncomfortable, even oppressive charge. Skulptura is a dream world, imprisoned in the second dimension.

Koen Hauser (the Netherlands, 1972) is a contemporary artist working with photography and film. He finished his Master of Science in social psychology (1996, Leiden University), later followed by studying photography at the Royal Academy of Art and the Gerrit Rietveld Academy (2002).
He frequently collaborates with different cultural institutes, museums and archives like gemeentemuseum Den Haag, the National Archive and the Rijksmuseum. Both in commissioned and autonomous projects he uses or references photographs and objects from their collections.

He received several grants from the Mondriaan Fund, and was awarded the title ‘Photographer of the Netherlands’ in 2014. His work is held in both national and international public and private collections, including Gemeentemuseum (Den Haag) and the Museum of Fine Arts (Houston). His work has been shown across Europe, the United States and China in various solo and group exhibitions including FOAM (Amsterdam), Unseen Photofair (Amsterdam), Institut Néerlandais (Paris) and the He Xiang Ning Art Museum (Shigzen, China).