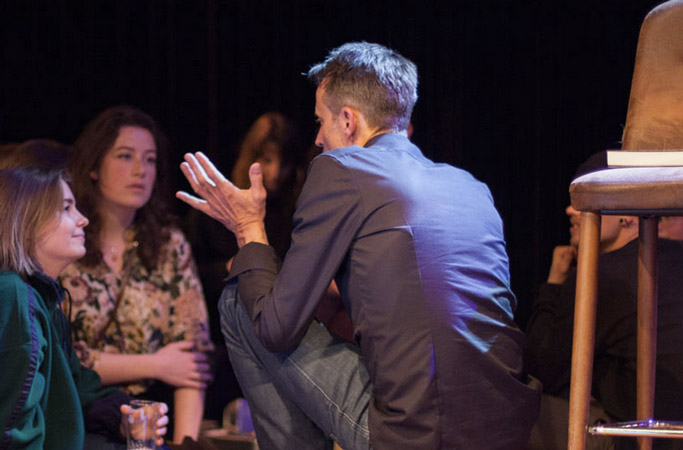 Live talk show in which photographer and photo-book aficionado Rob Hornstra goes on stage with makers of photo books: photographers, designers and publishers are interrogated about their latest projects. Acclaimed international makers talk about the stories they try to tell and the choices they make when translating them into a photo book. Expect compelling content with the occasional critical note.

Samuel Fosso is best known for his autoportraits, in which he transforms himself into other people and characters drawn from popular culture and politics.

He is born in Kumba, Cameroon, in 1962, and lived in Nigeria as a child. He fled Nigeria and the Biafra War with his family, and sought refuge in Bangui in the Central African Republic. He discovered photography in his early teens and followed a brief apprenticeship with a local photographer. In 1975, at the age of 13, he opened his own photography studio. He lived and worked at the studio and created portraits of the local residents. At the end of the day he would finish a roll of film by taking pictures of himself, to communicate his well-being to his grandmother in Nigeria. However, the staged self-portraits also became a mode of self-representation, and it gradually took on a more universal social and political dimension. Making self-portraits is something that he would never abandoned in his career.

During the 19th FOTODOK Book Club, Fosso will talk about his yet to be released books Autoportrait and SixSixSix.

Ilvy Njiokiktjien is a Dutch photographer born in Utrecht. She studied at the School of Journalism in Utrecht and worked at Spits (a Dutch newspaper) and ANP (the largest Dutch press bureau). She has worked in many parts of the world, with a focus on Africa. She is a news and documentary photographer, so she mostly covers current affairs and contemporary social issues.

During the 19th FOTODOK Book Club, Njiokiktjien discusses her decade-long project that is documented in her book Born Free. Here, she is depicting the opportunities and challenges faced by children in South Africa that have been born after the abolishment of the apartheid.