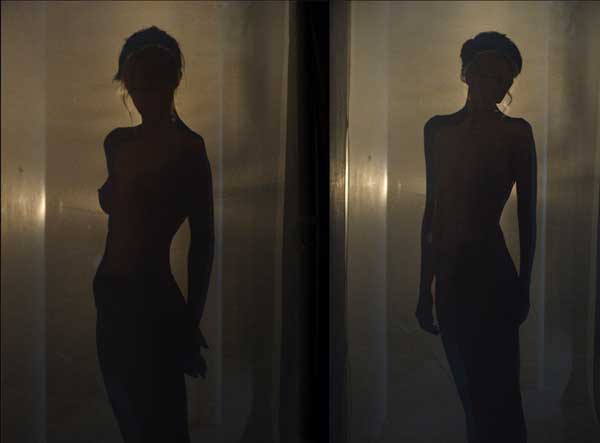 British Photographer Christopher Bucklow (b.1957) pushes the boundaries of his medium to explore nature, process, and the human form. His approach to his subject matter is multi-layered: utilising photography, drawing and video as the need arises. In their simplicity and directness, his photographic techniques are more akin to that of the pioneers of the exploratory processes of the 19th century than to more conventional and contemporary practices, incorporating elements of astronomy, chemistry and alchemy.

The Guests, initially Christopher’s wife and friends, appeared in 1993 as a gallery of humanoids who stand as representatives of the fissioned personality, as spirits who hover in their impersonation and possession of the quotidian human body. Subconsciously and after a personal philosophical and spiritual insight, the Guests were seen as representations of Bucklow’s own feelings, inner thoughts and dreams. Some of his many buried secrets, hoping to be discovered. Since then, the community of Guests has grown to more than thirty figures, all of them people that Bucklow has previously dreamed of or continues to dream of.

The astral raiment of these incandescent figures turn to confront us, eyelessly holding our gaze. They are created from thousands of punctures, letting in the sun to transubstantiate their drawn portrait silhouettes, resulting in their distinctive vibrancy, dependent on the time of day when the sun shone on them.
View fullsize

Christopher Bucklow’s unique photographs are not self-evident or straightforward, they don’t even look like most photography. They show no ordinary world, recognisable faces or events and yet one knows, somehow, that they are not purely imaginary. Curiously ambivalent, they seem tethered to reality while floating free of it: the gist of the mundane world is in them, but not its taste and texture.

The immediate allure of these pictures lies not only in their mysterious relation to reality, but also in their exquisite beauty. Only stained-glass windows and jewels offer such luminous depths, such rich and luxurious colours. Expansive, indeterminate and spatial, their fields of colour modulate from velvet darks to diaphanous veils that surround and give resonance to these radiant solar images.

‘Yet the sensuousness of the materials as transformed by Bucklow’s practice cannot altogether explain, nor contain, the power of the pictures, which seems couched in another realm. We detect it only as a nebulous, esoteric aura that clings to the pictures like a planet’s transparent atmosphere.’

Christopher Bucklow is a Somerset-based British, internationally acclaimed artist. He has exhibited worldwide, and his work is included in many key international collections, including: the National Portrait Gallery, London; the Guggenheim Museum, New York; the Metropolitan Museum of Art, New York; the Victoria & Albert Museum, London; the Museum of Fine Art, San Francisco; Herzliya Museum of Art, Israel; Phoenix Art Museum; High Museum, Atlanta, USA and the British Council, to name but a few. Bucklow was the first of the British Museum’s ‘Artist in Residence’ in 2002-2003, in London.