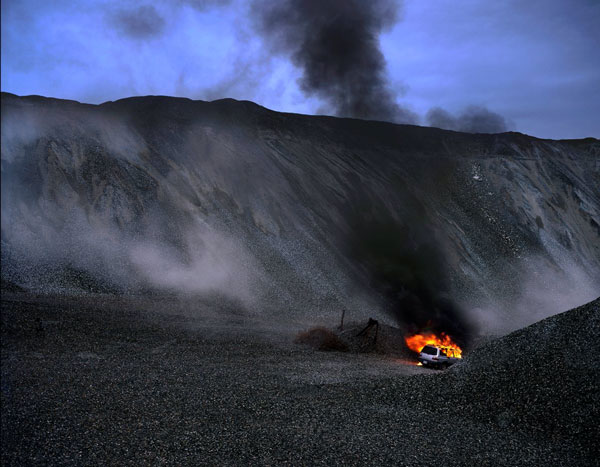 New Works, the first exhibition by Carlos & Jason Sanchez at the gallery since 2010, is a presentation of recent photographic works by the Montreal-based artist duo. The Sanchez brothers photograph meticulously staged scenes. Imbued with eeriness, a sense of suspense, and sometimes explosive sensationalism, their images are mystery stories that detonate in the viewer’s mind.

Through the intricacy of their custom-built sets and chosen locations, along with their masterful use of lighting and precise composition, the brothers freeze enigmatic moments from narratives that are never fully revealed.

Accompanying the exhibition is a new monograph on their work titled The Mystery Of, written by Adam Leith Gollner and published by Anteism Books. Also available for purchase is a special edition of the publication that includes a limited edition Fujiflex print of Border Crossing.

About the artists
Carlos (1976) and Jason (1981) Sanchez graduated from Concordia University in Montreal, Canada in 2001. They have since exhibited internationally and their work is featured in the collections of museums such as the National Gallery of Canada, San Francisco Museum of Modern Art, Museum of Fine Arts, Houston, and Musée de la Photographie de Charleroi, Belgium. The exhibition New Works presents the first body of work the brothers have produced since releasing their debut feature film, Allure, in 2017. They are represented in Canada by Christopher Cutts Gallery, Toronto.