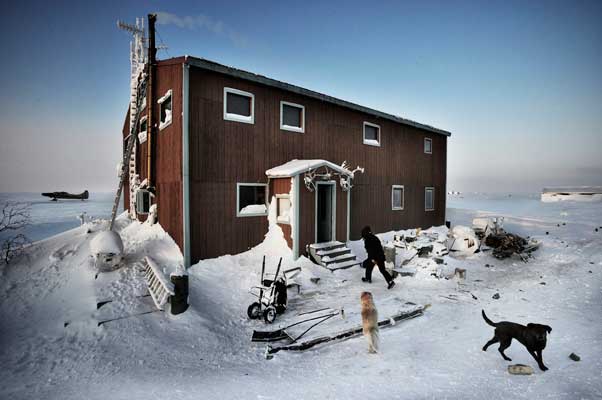 With the exhibition “Arctic: New Frontier”, by Kadir van Lohuizen and Yuri Kozyrev ( NOOR) , Gallery Vriend van Bavink opens a brand new exhibition space at the Geldersekade. Kadir van Lohuizen and Yuri Kozyrev carried out a double polar expedition for this photo serie. They were awarded the prestigious Carmignac Award that allowed them to simultaneously cover the entire Arctic territory to bear witness to the irreversible effects of climate change. The exhibition was previously shown at Foundation Carminac in France and Great-Britain and now is first shown in The Netherlands.

Lohuizen and Kozyrev wanted to experience the dramatic transformation of natural landscapes and the demographics in the Arctic, and the impact of these changes on the lives of the region’s inhabitants. The forces of militarisation, exploitation of gas and mineral resources, and the opening of trade routes mean that the Arctic is the site of conflicts. Countries and multinationals are locked in a chaotic competition for control of zones in the Artic, which have taken on strategic importance in the history of humankind due to the effects of global warming. The photographs in the exhibition Arctic: New Frontier are an alarming testimony to the speed of transformation in the region and the upheavals that are taking place on a global scale.

Kadir van Lohuizen has covered conflicts in Africa and elsewhere, but is probably best known for his long-term projects on the seven rivers of the world, the rising of sea levels, the diamond industry and migration in the Americas. He started to work as a professional photographer in 1988 covering the Intifada. In the years following, he worked in many conflict areas in Africa, such as Angola, Sierra Leone, Mozambique, Liberia and the DR of Congo. From 1990 to 1994 he covered the transition in South Africa from apartheid to democracy. Recently he had solo exhibitions in Het Scheepvaartsmuseum en Kunstlinie.

As a photojournalist for the past 25 years, Yuri Kozyrev has witnessed many world-changing events. Since the beginning of 2011, he has been following the Arab unrests, traveling in Egypt, Bahrain, Libya, and Yemen. Kozyrev has received numerous honors for his photography, including several World Press Photo awards. In 2011, he won the Visa d’Or news prize for his body of work On Revolution Road. Kozyrev’s work has been widely exhibited. He exhibited in Paris at La Maison de la Photographie Robert Doisneau.